PHYSICS AT SEA: EINSTEIN works on mathematical calculations during his ocean passage from Nazi Germany to America 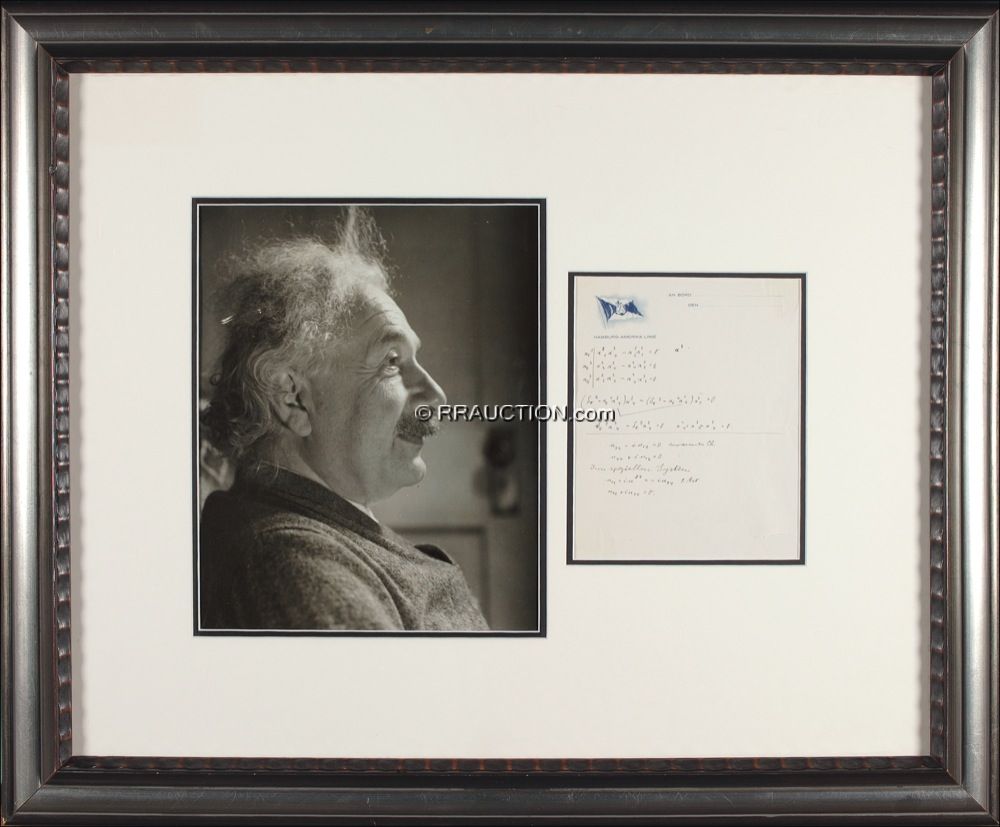 PHYSICS AT SEA: EINSTEIN works on mathematical calculations during his ocean passage from Nazi Germany to America

Original unsigned mathematical manuscript in Einstein’s hand, comprising nine lines of crisply penned, intricate equations on an off-white 6 x 7.5 sheet of Hamburg-Amerika Line stationery, circa 1932. The equations, evidently written during Einstein’s sea passage from Europe to New York, may relate to his “metric tensor,” which expresses space-time curvature in the Einstein field equations for gravitation in the theory of general relativity. (The metric tensor is also sometimes called the trace-reversed Ricci tensor.) Between the seventh and eighth lines, Einstein writes, in German, “in Special system.” In the early 1930s, Einstein recognized the threat that Hitler posed to Jews living in Germany, and to himself in particular, as a world-famous intellectual. In 1932, Einstein left his country of birth, never to return, and settled in America. In the same year, Einstein wrote two unpublished papers, both related to his theory of relativity, upon which were based modern cosmology and astrophysics. Double matted and framed, with an original 9 X 11.5 black and white photograph taken by Ifor Thomas, circa 1940’s, to an overall size of 26.5 x 22. Bisecting horizontal fold through one line of formula, and a small tear to lower right corner, otherwise fine condition. These notations would be placed among Einstein’s most important scientific discoveries. A handsome example of this most desirable of Einstein formats! Oversized. Auction LOA John Reznikoff/PSA/DNA and R&R COA.