Bid one for The Gipper! Amazing signed photo of football icon George Gipp 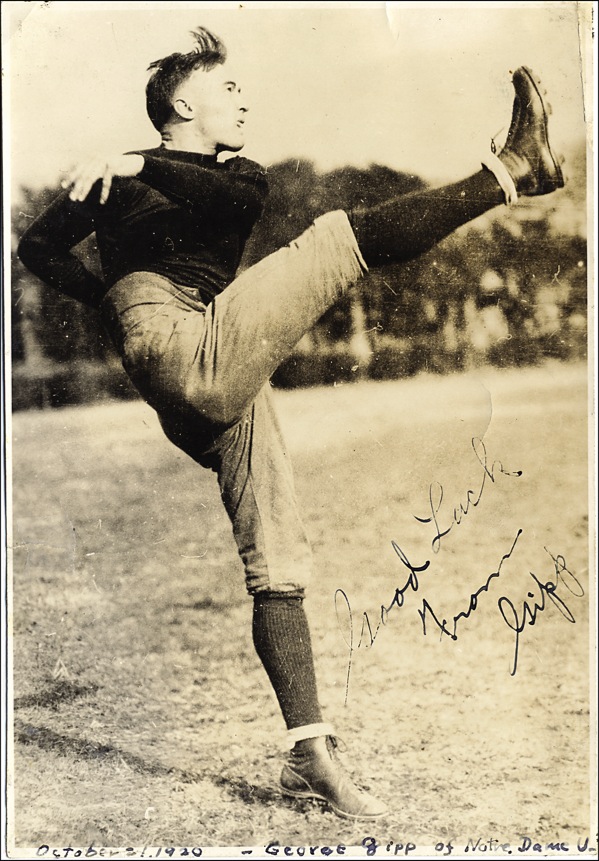 Bid one for The Gipper! Amazing signed photo of football icon George Gipp

Considered one of the greatest all-round college football players in the history of the game. At the end of his senior year at college, Gipp came down with strep throat. He died at the age of 25, on December 14, 1920, just two weeks before he was named Notre Dame's first All-American Football Player. Legend has it that on his deathbed, Gipp said to Knute Rockne, “I've got to go, Rock. It’s all right. I’m not afraid. Some time, Rock, when the team is up against it, when things are wrong and the breaks are beating the boys — tell them to go in there with all they’ve got and win just one for the Gipper. I don’t know where I’ll be then, Rock. But I’ll know about it, and I’ll be happy.” Rockne used the story of George Gipp, along with this deathbed line that he attributed to Gipp, to rally his team to an underdog victory over the undefeated Army team of 1928. Vintage glossy 4.5 x 6.5 photo of Gipp in his football uniform in his follow through after kicking the football, signed in fountain pen, “Good luck from Gipp.” In very good condition, with repaired horizontal tear to lower left edge, some scattered light creasing and areas of silvering, last letter of signature a bit light from ink flow and collector’s notation to bottom border. This is the first George Gipp item we have ever offered, based on the rarity of such an item and the name association, not just to football, but to American culture, makes this a desirable piece for the discerning collector. COA Steve Grad/PSA/DNA and R&R COA.